In trying to look up recipes for mille feuille one Saturday afternoon, in the multitude of books I own, I stumbled upon a recipe I had to make that day – jaffa cakes (found in a Great British Bake Off book of creations from the 2016 series).  How I’d not thought about recreating one of the classics of mine and my children’s childhood, well that was about to change.  I had all of the staples, but had to get in the car to get some orange jelly as the local shops only stock strawberry, which is annoying when you have everything else.

Like all bakes, they are pretty simple when you break them down – the jelly, the sponge and the chocolate topping, all bits covered below.

Once all mixed in, you’re ready to tip the jelly and zest mixture out onto a shallow baking tin. The recipe book calls for a 30 x 20cm baking tin, but any shallow tray, or plate will work. After pouring out the liquid onto the tray, pop the mixture into the fridge for at least an hour. The longer the better to be honest so its easier to handle.

Heat the oven to 180C/350F/Gas mark 4.  To make the sponge you want to put the eggs and the caster sugar in a bowl and use a food processor to whisk the mixture together until light and fluffy.  The fluffier the better here, it makes the cakes really light and tasty, hand whisking is really tiring and takes a long time!  It should be done in about 4-5 minutes using the food processor, at which point you can fold in the flour in a couple of minutes.  Folding rather than stirring means that you don’t beat the air out of the eggs and don’t make a flat mixture, for that reason I tend to use a spatula rather than the food processor.

Once the fluffy mixture is ready, you want to spoon out the mixture into a greased shallow 12-hole shallow bun tin/mince pie tin.  Don’t fill the mixture to the top, you want to be about 3/4 to the top of each hole as the cakes will rise.  You can then bang the tray into the oven for about 7-9 minutes until the sponges are light golden and puffy, and they feel springy to the touch… like a sponge!  Leave for a couple of minutes before decanting the sponges onto a wire rack to cool.  I use a metal icing spatula to help prize them from the tin, otherwise you risk part of the cake being left behind, which as Angus would say, would make you sad in your tummy.

When the cakes have cooled down and the jelly is ready, use a 5cm plain round cutter to make circles in the jelly that’s formed in the shallow pan and drop onto the top of each of the cakes.  The recipe in the book calls for you to peel the jelly from the pan and onto a piece of baking paper, or parchment.  However, this after trying it a couple of times is a pain in the arse and the much simpler way of doing it is to cut the circles directly from the pan!

Once you’ve adorned each of the cakes with a orange and zingy circle and probably munched your way through a few to boot, you can then do the crowning glory, the chocolate topping.  This bit is pretty straightforward and I’ve found the best result comes from mixing dark and milk chocolate so as you bite through the chocolate it is bitter, but not too sickly.  Easiest way I’ve found is to use a glass bowl on top of a saucepan with boiling water on the hob.  It takes 4-5 minutes to get the chocolate where you want it – all melted and pourable.  Once there, I take it off the heat and let it cool slightly so it doesn’t melt the jelly, it is also a little thicker so creates a great covering for the cake.

The best time to eat them in Sarah and I’s opinion is when the chocolate is just set an maybe still a little warm.  Biting into one of these amazing little chocolate and orangey nuggets, transports you back to your childhood when calories weren’t a thing and you’d never seen a set of scales.

Thanks for visiting and please let me know how you get on if this has inspired you to give them a go. 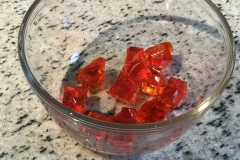 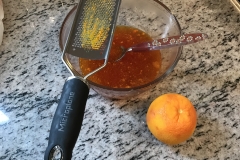 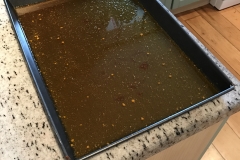 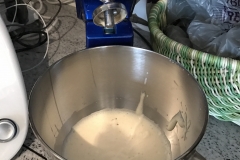 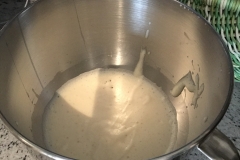 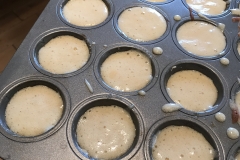 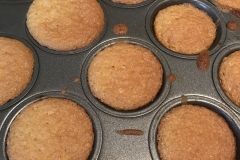 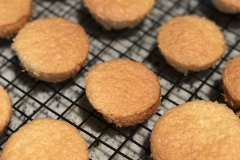 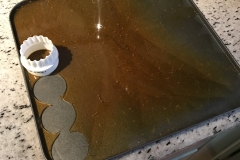 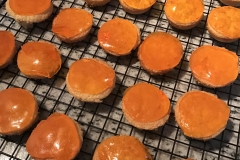 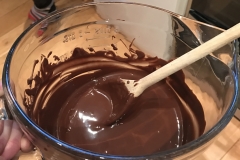 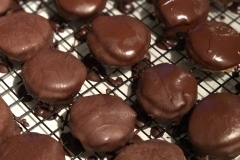 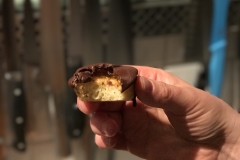 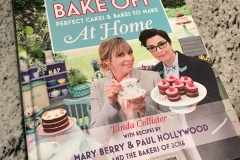 1 comment on “Jaffa cakes, gone in one bite”Add yours →